Trumka: TPP Is a New Low 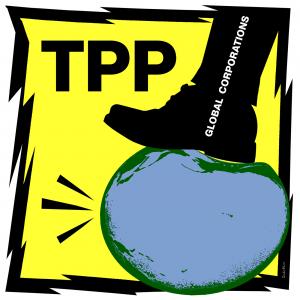 In a new op-ed for the Hill, AFL-CIO President Richard Trumka explains the key reasons why the Trans-Pacific Partnership is bad for working people, both in the United States and overseas. Trumka describes the deal by saying that "the TPP is a giveaway to big corporations, special interests and all those who want economic rules that benefit the wealthy few."

We’ve been down this road before. The Wall Street and Washington elite always tell us that this time will be different. The truth is these trade deals have ripped apart the fabric of our nation. We see the shuttered factories. We visit towns that look like they are stuck in the past. We talk to the workers who lost everything, only to be told they should retrain in another field—but Congress has been slow to fund and authorize those programs. From NAFTA to CAFTA to Korea and now the TPP, these agreements have continually put profits over people. By driving down our wages, they make our economy weaker, not stronger.

In many ways, the TPP is a new low. A quick search of the agreement shows no mention of the terms “raising wages” or “climate change.” And by ramming through fast track legislation earlier this year, Congress effectively barred itself from making a single improvement to the TPP.

Working people deserve a better process and a better product. We understand better than anyone that the TPP is just another tool to enrich corporations at the expense of everyday families. We cannot and should not accept it.

Because it can’t fix the TPP, Congress has to take the step of saying to 11 other countries, “No, not this TPP.” Taking that brave step is necessary to create trade rules that lift people up, not crush them under crony capitalism.

Our guest in the interview segment is Kaela Berg from the Minnesota Fair Trade Coalition. We talk about the Trans Pacific Partnership (TPP) trade agreement and what it means for working people in Minnesota.