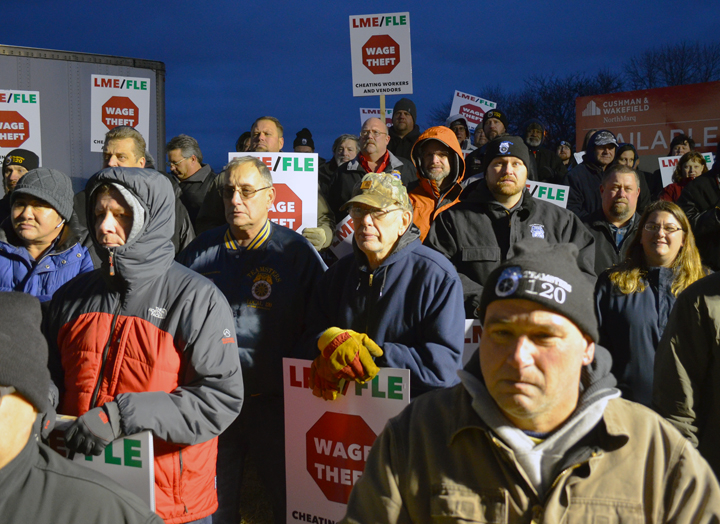 Heartbreaking, gutless and dishonest were among the ways workers, union leaders and high-ranking elected officials described a Roseville trucking firm’s decision to withhold pay from 90 members of Teamsters Local 120 after abruptly closing the week of Thanksgiving.

Out-of-work Teamsters staged a rally last night outside Finish Line Express, a Maple Grove-based trucking company that, workers allege, has absorbed Lakeville Motor Express’ business since it abruptly closed shop Nov. 20. Local 120 President Tom Erickson said the closure was “surgically done” to shake off the union’s contract more than a year before it is set to expire.

Local 120’s officers pledged a campaign to raise awareness of Finish Line’s “shady business practices,” particularly among the company’s clients. They include John Deere, 3M, Land ‘o Lakes and Toro – which, not coincidentally, are many of the same clients Lakeville Motor Express served.

“Every day we’re going up and down this street, trying to find these customers and divert them in a different direction,” Erickson said. “That’s the only way we’re going to win this thing.”

Meanwhile, state officials are pursuing wages owed to workers locked out of their jobs by LME. Lieutenant Gov. Tina Smith, who likened the company’s behavior to “stealing,” said the Department of Labor and Industry has filed six claims on behalf of former LME employees already.

“And I suspect there will be more,” Smith said.

Several former LME workers described having their lives turned upside down by the company’s sudden decision to pick up and, allegedly, move to Maple Grove without them.

“I spent 14 years here, and now I’m left with no insurance for my family, no paychecks,” Shane Thompson of Braham said, standing next to his wife, Lisa, and their two sons. “It kind of hurt. It’s been kind of a struggle.”

For both Roger Nelson of White Bear Lake and Steve Satterlee of Cottage Grove, there could not have been a worse time to lose their family health insurance coverage. Nelson’s wife faces surgery, and Satterlee’s relies on expensive medication to live a “normal life” with a disability.

Smith pledged assistance for workers navigating the state’s unemployment insurance system, and she said LME could face penalties if it refuses to comply with orders to pay back wages.

“I want the people in these buildings to understand that they cannot just get away with this,” she said.