Striking nurses call on Allina to return to bargaining table 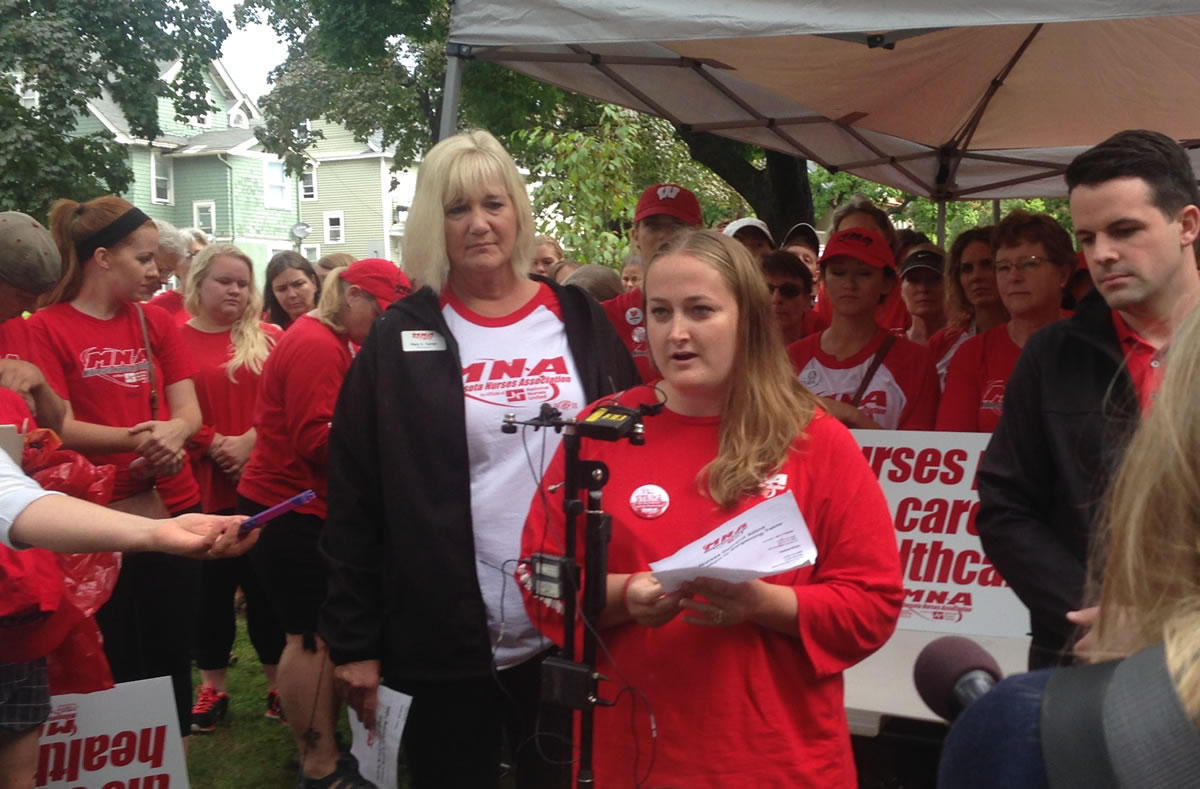 One day into their open-ended strike, members of the Minnesota Nurses Association called on Allina Health to return to the bargaining table and “bring experienced nurses back to the bedside.”

MNA leaders held a news conference Monday across from Abbott Northwestern Hospital in Minneapolis, one of five Allina sites being picketed. The others are United Hospital in St. Paul, Phillips Eye Institute in Minneapolis, Unity Hospital in Fridley and Mercy Hospital in Coon Rapids. Allina is attempting to operate the facilities with an undisclosed number of replacement nurses.

Allina has not responded to the nurses’ last offer, submitted at 5:15 a.m. Saturday, the union said. A federal mediator informed the nurses at 6 a.m. that Allina negotiators had left. No new negotiations have been set.

“Where’s Penny? Dr. Penny Wheeler, you need to respond to the nurses’ proposal, but we know you can’t because you’re not here,” said Angela Becchetti, registered nurse at Abbott and member of the nurses’ negotiating team.

Wheeler is CEO of Allina Health. The union said she and Ben Bache-Wiig, president of Abbott Northwestern Hospital, are speaking at a Health Catalyst conference in Salt Lake City. According to the MNA, Allina Health has invested more than $100 million in Health Catalyst, a data analytics firm.

Matthew Keller, regulatory and policy nursing specialist for the MNA, said the focus of the conference is on “turbo-charging financial outcomes” that should “not be the goal of nonprofit health care.”

After talks broke down early Saturday, MNA negotiators said they had agreed to a phase-out of certain health insurance plans – a key demand of Allina – and they believed a settlement was close on a three-year contract. They said their counter-proposal, which Allina did not respond to, contained agreements on many issues, including workplace safety, improvements to staffing and a monetary safety net for nurses who could face financial ruin by moving to the higher-deductible Allina insurance plans.

“Nurses are committed,” Becchetti said. “We’re here to get a fair contract. Allina can end this strike and bring experienced, nurses back to the bedside.”

MNA said that, despite the rainy weather, more than 2,500 nurses walked the picket lines on Monday. A total of about 3,800 are covered by the union contract.