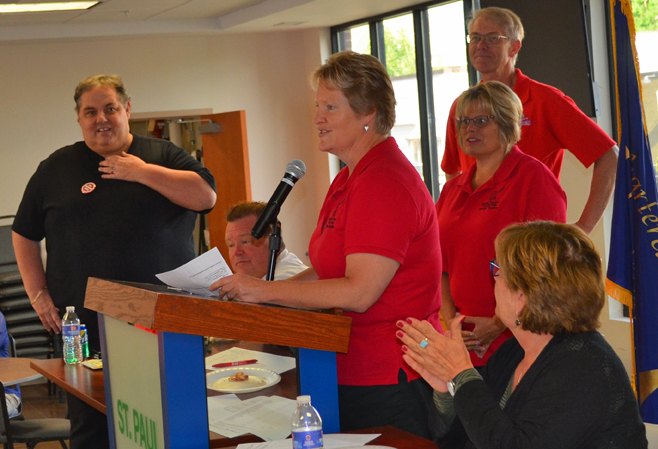 We all do better when we work together. That’s the lesson teachers and support staff in the North Branch Area Schools learned from the district’s first successful referendum campaign in at least 15 years.

And it was a valuable lesson, as voters in a special election May 23 approved all three of District 138’s funding requests, worth a combined $70 million for repairing the district’s facilities, updating classroom technology and building new gym space.

The successful “Vote Yes” campaign broke a streak of at least seven consecutive failed attempts to inject new funds into the North Branch Schools. But none of those referendum campaigns benefitted from the labor-community partnership educators, working through their local unions, built this time around.

“It was historic that this group of people came together,” Stacy Johnstone, co-president of the North Branch Education Association, said of the “Vote Yes” campaign. “Labor has never been as involved in passing a referendum, working as a team with the district and the community. This partnership was what passed it.”

Bargaining units within the district “have not always played nice in the sandbox,” Johnstone admitted. “But something happened this time around, and people were willing to put hard feelings aside and work as a team.”

The spirit of cooperation proved contagious.

Working together helped the NBEA and the North Branch Support Staff Association draw support from their statewide union, Education Minnesota, as well as the Chisago County Labor Assembly and the St. Paul Regional Labor Federation – support that meant resources, political expertise and volunteers.

“They have experience with political strategy that no one in our district had,” Johnstone said of the St. Paul RLF. “We knew if we were going to do this we had to pull together to access those resources. We needed organizing strategy, and that’s the expertise (RLF President) Bobby Kasper and (political organizer) Vicki Beebe brought.”

The RLF hosted biweekly phone banks out of the St. Paul Labor Center throughout April, and RLF political staff helped recruit volunteers for door-knocks and phone banks on the ground in North Branch, urging union members who live in the district to support the referendum.

The RLF is based in St. Paul, but the federation represents workers in four counties – Ramsey, Washington, Dakota and Chisago – and hosts monthly meetings in each county to engage rank-and-file union members in local issues and campaigns. Beebe, who coordinates the RLF’s Chisago County Labor Assembly, said the victory in North Branch speaks to the power of belonging to something bigger.

“The district, city council, community and labor unions partnered together and made history,” Beebe said. “It was an inspirational demonstration of what can happen when people with a wide range of interests come together.”

The real winners, of course, are students in the district, which will no longer have to rely solely on its general fund to maintain and modernize its facilities.

“We have a 1960s boiler falling apart, we have windows that are outdated, we have furniture from 1975 that needs replacing,” German teacher Barb Swenson said. “It’s hard to invest in students when all these different maintenance costs are just eating away at our general fund.”

“We also needed this for our community,” NBSSA Co-President Joanne Kreitz said. “When there are strong schools, more families move into North Branch, and that means more jobs.”

The impact of solidarity, Kasper said, showed up in the increased voter turnout May 23, compared to a failed referendum campaign in North Branch just one year earlier. The number of voters jumped from 2,207 to 2,976.

“It was an uphill battle, but with dedication and hard work from so many stakeholders, we pulled it off,” Kasper said. “It’s a credit to the tenacity of North Branch educators and parents, as well as the chair of our Chisago County Labor Assembly, Michael Madden.”