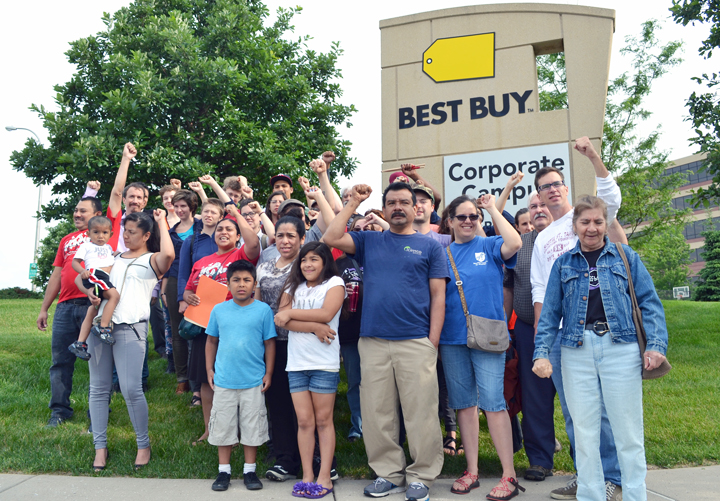 A protest planned by retail janitors today outside Best Buy’s corporate headquarters turned into a celebration after executives agreed to partner with workers on efforts to ensure people who clean the company’s stores have safe and fair working conditions.

Target approved the policy two years ago, and it includes provisions ensuring a safe and fair process for workers organizing for a voice on the job. The agreement with Best Buy, according to CTUL, will ensure “a responsible janitorial contractor” cleans Best Buy stores.

Outside the shareholder meeting today, janitors and their supporters from the community praised Best Buy for doing right by workers who clean its stores.

“I’m happy that Best Buy has heard our voices and has taken a leadership role to improve the janitorial industry here in Minnesota,” said Jose Gonzalez, an employee of KBS who cleans an area Best Buy store. “I am confident that janitors who clean Best Buy will be able to begin a dialogue with our employer and improve our working conditions.”

One year ago, workers like Gonzalez banged on drums, carried signs and chanted slogans outside the annual shareholder meeting. Today, they quietly reflected on how far their campaign to raise wages and improve conditions for retail janitors – now entering its seventh year – has come.

“This news makes me very happy,” said longtime CTUL activist Maricela Flores, who cleans an area Target store as an employee of Carlson. “Today, because of our struggle to bring these injustices to light, Best Buy has listened to our petitions and is showing leadership by agreeing to contract a responsible janitorial contractor to clean their stores.”

The victory gives Flores and other workers a shot of momentum as they push other retailers to join Target and Best Buy – momentum they wasted no time putting to use.

After leaving the Best Buy campus, workers crossed the bridge over I-494 to demonstrate inside and outside a Kohl’s store. Two CTUL activists, employees of the cleaning contractor Kimco, described the conditions they face cleaning Kohl’s stores, including long hours and low wages with no voice on the job.

Workers have been pushing Kohl’s to address concerns about the cleaning contractor for more than two years.

It might not be Kohl’s, but other major retailers in the Twin Cities may be on the cusp of giving janitors less cause for protest and more cause for celebration. CTUL organizers today credited Herberger’s for taking “positive steps” toward implementing a policy similar to the one Best Buy approved.

“We hope that other stores will follow large corporations like Best Buy and Target in working to recognize the need for change in the retail janitorial field in Minnesota,” Flores said.