Nurses say Allina talks are over, another strike possible 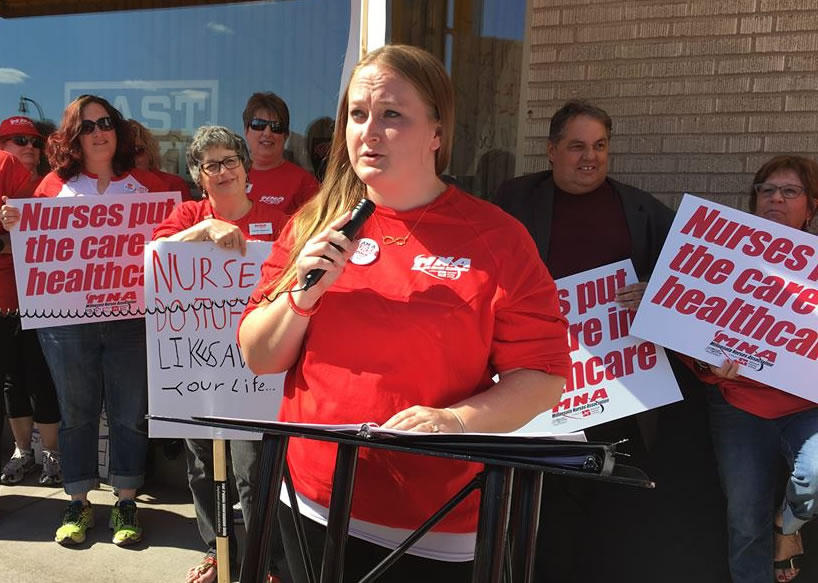 The Minnesota Nurses Association will take an offer from Allina Health to members later this month, but say the company has refused to bargain in good faith and another strike by 4,800 registered nurses is possible.

Allina responded by proposing to cut two of the nurses' health plans immediately, and ending the Choice and Advantage plans when they dip below 1,000 participants, the union said. “Allina would also cause nurses to bear the brunt of all future premium increases, which would force them to opt out of those two remaining plans,” MNA said in a statement.

"We met Allina halfway and that's as far as nurses will go," said Angela Becchetti, a registered nurse at Abbott Northwestern Hospital in Minneapolis.  "We've bargained in good faith with Allina for six months now, even when they haven't."

MNA has filed unfair labor practice charges with the National Labor Relations Board over Allina's refusal to provide information about the costs of the health insurance plans. Nurses have been asking Allina what parts of the plans are so costly that they need elimination. Allina has refused to provide this information, prompting nurses to stage a seven-day strike in mid-June.

"Nurses don't want to strike again," Becchetti said, "but they're angry over how Allina has treated them during these negotiations. Now, they just want an offer to vote on."

The union said a separate contract vote will take place at each of Allina's five metro facilities: Abbott Northwestern, Mercy, Phillips Eye Institute, United and Unity hospitals. Nurses will vote to accept or reject the offer.  A vote to reject the offer is also a vote to authorize another strike. If a super-majority of "no" votes is reached, the nurses' negotiating team decides the length of any strike as well as the start date.

"The strike brought nurses together," Becchetti said. "And everything Allina has told us has only unified us even more. Nurses are prepared to protect their benefits."