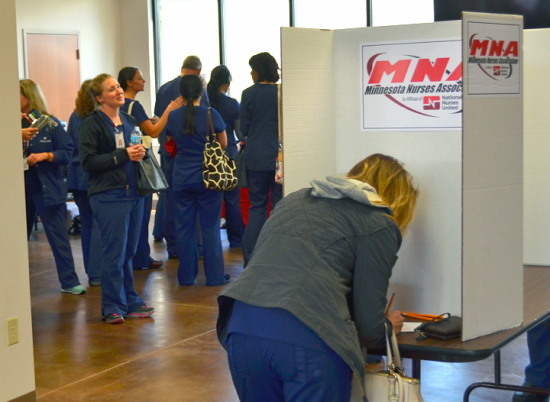 Nurses at four Allina Health facilities in the Twin Cities area are preparing to strike after a “super majority” of union members voted to reject the health care provider’s latest contract offer.

The vote sends a clear message to Allina, members of the Minnesota Nurses Association said, that nurses will continue to stand together for a fair contract that protects their affordable health insurance – for as long as it takes.

“Nurses know what’s at stake. Nurses are prepared,” Abbott Northwestern nurse Angela Becchetti said. “We have to be advocates for our practice, our patients, and for ourselves and our family.”

[Sign a petition in support of Allina nurses at www.nursesneedcare2.com.]

Contract talks covering about 5,000 nurses at Unity, United, Abbott Northwestern and Mercy hospitals, as well as Phillips Eye Institute, began in February. Their previous contract expired May 31, and rather than continue negotiations, Allina left the bargaining table last week and presented a “complete offer,” rejected by nurses yesterday in voting at three metro-area locations.

From the outset of negotiations, Allina has focused on eliminating four union-sponsored health insurance plans and moving all nurses into Allina’s “core” plans, which offer lower premiums but significantly higher deductibles, co-pays and out-of-pocket costs. Allina says the move would save $10 million.

“Allina’s negotiators never made the case why they need to cut nurses’ health plans and ask nurses to pick up $10 million in costs,” Becchetti said. “They’ve said it’s not about money. They said it’s about lowering nurses’ benefits to the low levels that their other employees suffer with.”

Other issues remain unresolved as well. “Allina Health has refused to bargain about any of the other outstanding issues the nurses have brought forward, including staffing and workplace violence,” Becchetti said.

MNA must give Allina notice at least 10 days in advance of a strike.