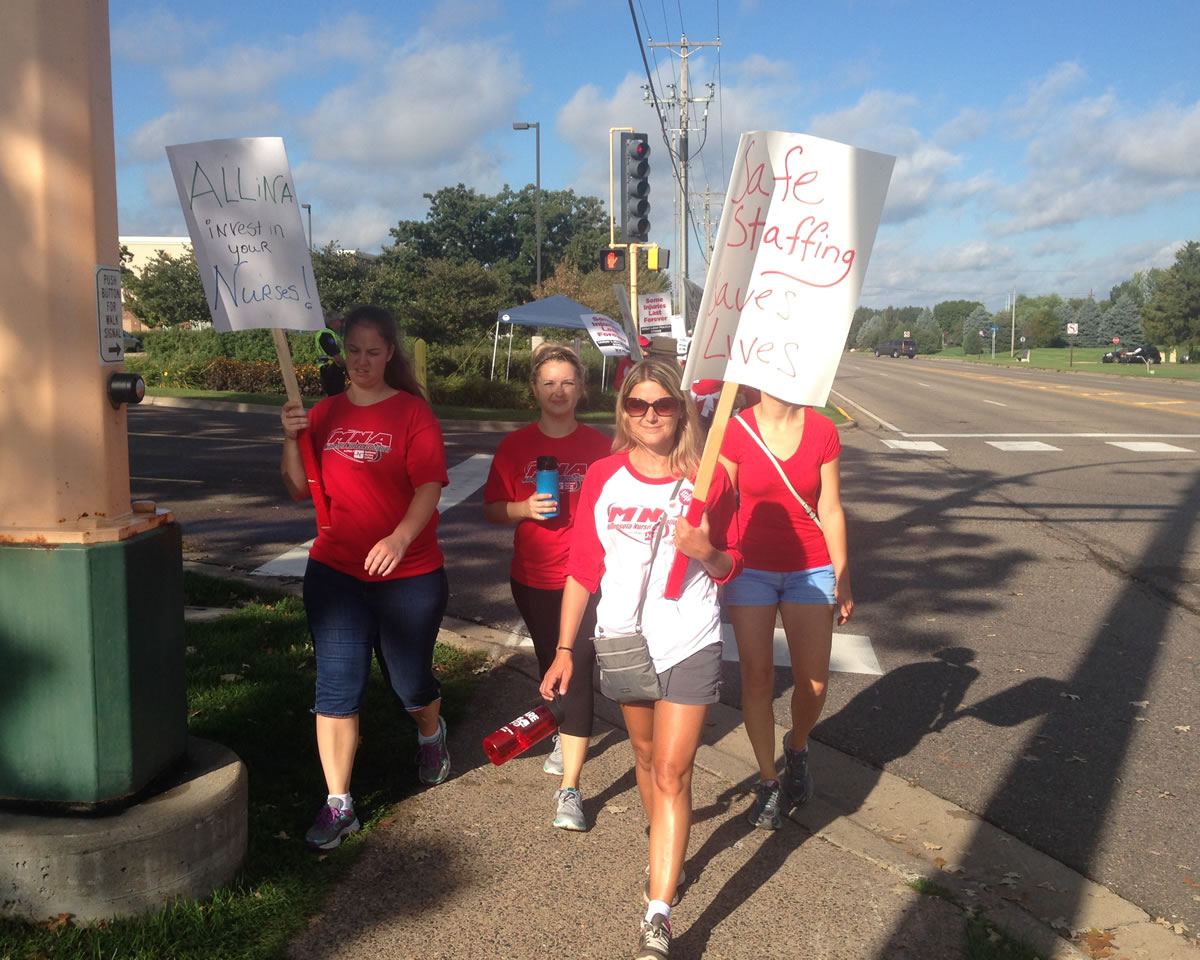 Morganna Moon and Lou Ann Uhr spent 22 hours in negotiations Friday with Allina Health, then joined hundreds of their colleagues Monday on the picket line at Mercy Hospital in Coon Rapids.

“We tried everything in order to not be here” on strike, said Moon. But even after the Minnesota Nurses Association compromised on the key issue of health insurance, Allina still wanted more, she said.

Unlike the nurses’ weeklong strike in June, “this time we have no choice but to walk out with no end date,” she said.

Some 3,800 registered nurses began picketing at 7 a.m. Monday at Mercy, Abbott Northwestern and Phillips Eye Institute in Minneapolis, Unity Hospital in Fridley and United Hospital in St. Paul. A last-minute bargaining session Friday, with the help of a federal mediator, failed to produce a settlement.

Moon and Uhr, co-chairs of the MNA unit at Mercy, were among the nurses who participated in the negotiations. Uhr, a veteran of many contract campaigns, said the recent talks were like nothing she had ever experienced at the bargaining table.

[Allina] is “not willing to work with us,” Uhr said. The negotiations, she said, are about much more than saving a few dollars on insurance. “It’s about staffing and the care of patients.”

Nurses walking the line at Unity Hospital in Fridley agreed.

“It’s about the responsibility of Allina to do good for the community and they’re not doing that,” said Stephanie Carroll.

“They’re not living out their values,” said Carla Soler.

At a news conference Monday, MNA officers said nurses and hospital negotiators agreed on several items in Friday’s session, including providing a 24-hour security guard in the emergency rooms to protect nurses and patients and allowing new nurses into the contract health plans for a limited time. MNA nurses thought a tentative agreement could still be reached, which would have averted a strike.  "Allina Health has been asking to terminate the nurses’ health plans, and the nurses were willing to allow them to be phased out," said Rose Roach, MNA executive director. "But Allina must have felt they had a weak victim in the nurses, because they raised the price of an agreement by asking for more concessions. This is what happens when the profit mindset takes over healthcare.”

Patients see the difference
Allina is attempting to keep the facilities running with supervisors and replacement workers. Fedor Obada of Blaine, whose wife just gave birth to twins at Mercy Hospital, said the quality of care has been affected.

“The personnel who just came – they’re kind of lost,” he said. “We can see the difference – and it’s not better than it was before.”

Obada came out to the picket line to find out what was going on. After talking with strikers, he returned to his wife’s bedside wearing an MNA cap.

Supporters, ranging from members of other unions to elected officials, joined picket lines at the five facilities. Teachers, paramedics, and communications workers have agreed to picket Allina facilities as well, MNA said. Some delivery drivers are stopping at the nurses' picket line and telling Allina management to come out and drive the delivery vehicles into the hospital.

Nurses will continue to strike Allina hospitals until an agreement is reached, the union said. No new negotiations have been set.