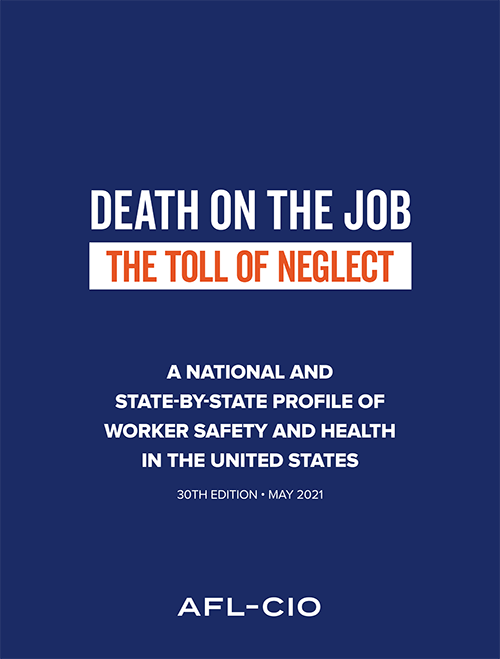 According to a new report released today by the AFL-CIO, Minnesota had the 8th lowest (and 42nd highest) rate of workplace deaths in 2019. This analysis, based on data from the Bureau of Labor Statistics, shows that 80 working Minnesotans lost their lives due to on-the-job injuries, resulting in 2.6 deaths per hundred thousand workers.

“This year’s report is yet another reminder of the dangers facing working people in Minnesota every single day, not to mention the increased risk of COVID-19 during 2020 and 2021. While Minnesota’s workplace death rate was comparatively low compared to other states, a single death on the job is one too many,” said Minnesota AFL-CIO President Bill McCarthy. “Working people deserve better. We have a right to a safe workplace and a voice on the job. What’s more, we deserve leaders in St. Paul and Washington who will stand up for those rights.”

The report, titled “Death on the Job. The Toll of Neglect” marks the 30th year the AFL-CIO has produced its findings on the state of safety and health protections for workers within the United States. The report shows the highest workplace fatality rates are Alaska, Wyoming, North Dakota, Montana, and West Virginia.

Fifty years ago on April 28 the Occupational Safety and Health Act went into effect, promising every worker the right to a safe job.  The law was won in 1970 because of the tireless efforts of the labor movement and allies, who drew major attention to work-related deaths, disease and injuries, organized for safer working conditions and demanded action from their government.

But today, due in part to the irresponsible anti-worker policies of the previous administration, OSHA’s meager resources have kept declining. Federal OSHA now has only 774 safety and health inspectors and state OSHA plans have a combined 1,024 inspectors—the lowest total number of OSHA inspectors since the creation of the agency. It would take federal OSHA 253 years to inspect all covered workplaces once.