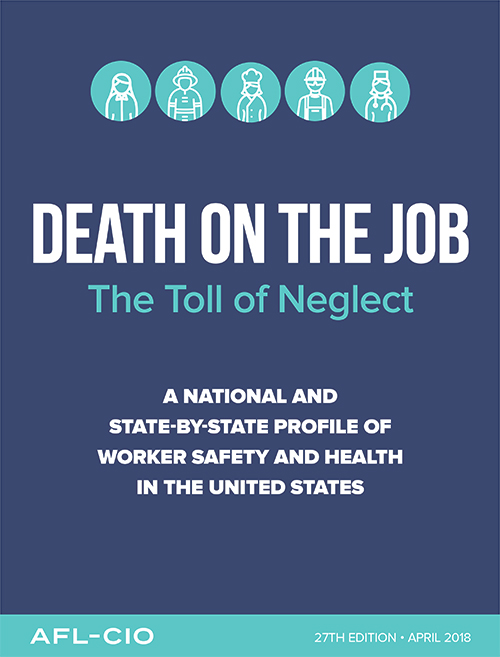 According to a new report released today by the AFL-CIO, Minnesota had the 31st highest rate of workplace deaths in 2016. This analysis, based on data from the Bureau of Labor Statistics, shows that 92 Minnesota workers lost their lives due to on-the-job injuries, resulting in 3.4 deaths per 100,000 workers, compared to the national rate of 3.6.

“This year’s report is yet another reminder of the dangers facing working people every single day,” said Minnesota AFL-CIO President Bill McCarthy. “Minnesotans deserve better and should be leading the nation in workplace safety. We have a right to a safe workplace and a voice on the job. What’s more, we deserve leaders in St. Paul and Washington who will stand up for those rights. It’s time for change, and working people are joining together to secure the economic rights and dignity that we’ve earned.”

Nationally, 5,190 American workers died on the job in 2016, an increase from 4,836 deaths the previous year. Another estimated 50,000 to 60,000 died from occupational diseases, meaning approximately 150 workers died on the job each day from preventable, hazardous workplace conditions. Overall, the national job fatality rate increased to 3.6 per 100,000 workers from 3.4 in 2015.

“We deserve to walk out the front door in the morning knowing we’ll return home safe and healthy after a full day’s work,” said AFL-CIO President Richard Trumka. “It’s a travesty that working people continue to lose their lives to corporate greed. The selfish and reckless decisions being made in boardrooms and in Washington are killing the very people who built this country. This is officially a national crisis, and it’s only getting worse.”

The report, titled “Death on the Job: The Toll of Neglect,” marks the 27th year the AFL-CIO has produced its findings on the state of safety and health protections for workers within the United States. The report shows the highest workplace fatality rates are in Wyoming (12.3 per 100,000 workers), Alaska (10.6), Montana (7.9), South Dakota (7.5) and North Dakota (7.0).

Other report highlights show that the construction, transportation and agriculture industries remain among the most dangerous. In 2016, 991 construction workers were killed—the highest total of any sector. Agriculture, forestry, fishing and hunting was the most dangerous industry sector per capita, with a fatality rate of 23.2 per 100,000 workers.