Minnesota union members marched against Trump in droves. Here’s why 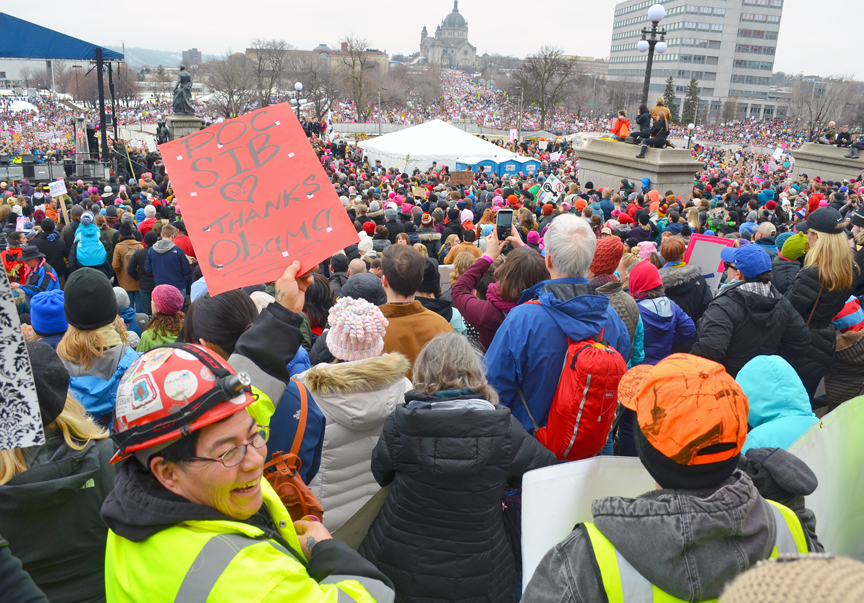 Dressed in hard hats and union colors, union members were among the estimated 100,000 people who joined the Women’s March in Minnesota one day after Donald Trump’s inauguration, capping three days of protests – locally and nationally – that put the new administration on notice of popular opposition to his policy objectives and governing approach.

Stretched from the cathedral to the Capitol in St. Paul, the historic crowd represented, for union members who participated, a stirring display of the solidarity it will take to fend off attacks on working people’s rights, women’s rights, immigrant families and others feeling vulnerable as the former reality-TV boss – with a track record of not paying his employees and joking about sexual assault – assumes the highest office in the land.

“We’re in the majority,” Sprinklerfitters Local 417 member Kimberly Brinkman said from the steps of the Capitol, overlooking a sea of anti-Trump demonstrators. “We want common decency to prevail.”

Trump’s inauguration inspired a flurry of events locally planned by unions and progressive groups, who offered hopeful counterprogramming to offset the president’s message of “American carnage.” Union teachers in St. Paul rallied around the district’s immigrant students. Janitors from 12 area Home Depot stores went on strike. And U of M students and workers led a massive march into downtown Minneapolis.

Working people who joined the protests spoke of a need to find strength in numbers at the dawn of uncertain times.

“There’s an immediate need to be together with people, to link arms and to have it be about love and inclusiveness,” Mona Meyer, president of the Communications Workers of America’s statewide council, said. “Right now all of that feels like it’s being threatened.”

For Samantha Kaneaukua, a member of Carpenters Local 322, the threat posed by Trump and congressional Republicans feels uniquely personal. “As a union carpenter, as a person of color and as a lesbian, it’s pretty much everything I stand for, everything I am, that he is opposed to,” she said. “There’s no reason not to be here fighting.”

Why don’t working people get over it and give Trump a chance? After all, he did win fair and square (albeit with an assist from some Russian friends).

“I respect the office,” Meyer said. “I don’t respect the policies and ideas of division and hatred. I don’t like personal attacks on union leaders, civil rights leaders – all of this childish, outlandish behavior. It isn’t becoming of a president.”

If there were any doubts about Trump’s anti-labor intentions, other union members said, his cabinet picks removed them.

“This is going to be an all-out assault on working families,” St. Paul Federation of Teachers Vice President Nick Faber said.

Eliot Seide, executive director of AFSCME Council 5, called it a “cruel” bait and switch: “A campaign that promised to lift up working people is transitioning into an administration designed to tear all of us down.”

It’s true that many working people supported Trump, and he did better among union members than recent Republican presidential nominees. Karlan Bean, who drove Teamsters Local 120’s semi-truck to the Jan. 21 march, said he knows “too many union members” who backed Trump.

“I’m hopeful that it doesn’t turn out as bad as in the back of my head I fear it will, especially for unions,” Bean added.

“We already know he’s been sued so many times for not paying his labor, and we know he supports Right to Work,” Brinkman said. “A lot of union guys were talking about Trump. It’s going to be one eye-opener for them to see what he does to working families.”

Maybe it was the intoxicating hopefulness of a mass march. Or maybe living in hope is an easier choice than wallowing in despair. But many union members insisted that, by standing together and remaining vigilant, they could fight Trump’s agenda and hold onto their rights.

“The union is kind of reflective of how we need to be,” Carpenters Local 322 apprentice Michelle Rousseau said. “If we stand together and stay united, we’ll be OK.”

Faber said his union would increase its efforts to connect “with other groups and other causes in town” that share teachers’ values. Hager and Brinkman said women in the Trades plan to push locally and nationally to increase hiring goals within the industry for women. Meyer said CWA members have been “thinking not just defensively, but how to move forward based on what workers need, what people need, what families, women, immigrants and LGBT people need.”

Kaneaukua, meanwhile, plans to fight for her rights one person at a time by engaging people with different perspectives than her own. And opportunities abound on the job site.

“We need to speak up against discrimination in all of its forms,” she said. “We don’t know each other well enough. I feel like being able to have those conversations and talk about things that maybe my co-workers aren’t used to, that makes a big difference.

“That’s going to be my day-to-day approach.”