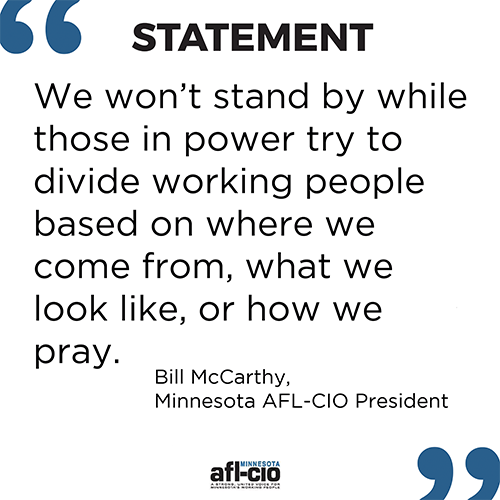 The Executive Board of the Minnesota AFL-CIO, the state Labor federation of more than 1,000 local unions who collectively represent more than 300,000 working people, passed a resolution reaffirming its support for welcoming refugees and immigrants to the state.

The resolution comes as states and counties are deciding whether to allow refugee resettlement, as required by a presidential executive order (currently blocked by a federal judge).

The resolution’s text affirms that, “as a labor movement, we represent tens of thousands of refugee members, as well as the front-line service providers who ensure that refugees are properly screened and have their basic human needs addressed” and calls on elected officials to, “provide support to those fleeing oppression and violence to build a better life among us.”

“This resolution is a statement of the Labor Movement’s long-held values,” said Minnesota AFL-CIO President Bill McCarthy. “We won’t stand by while those in power try to divide working people based on where we come from, what we look like, or how we pray.”