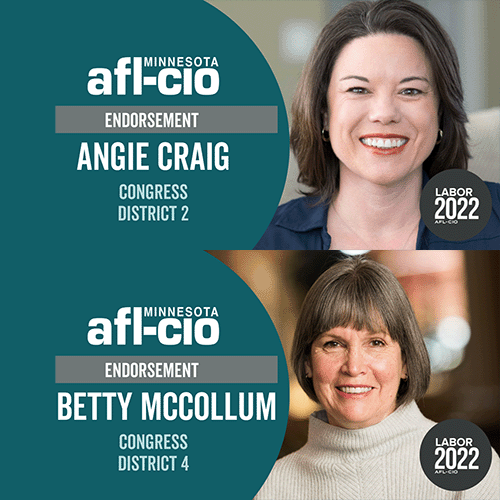 The Minnesota AFL-CIO General Board began taking action on Congressional and Legislative candidate endorsements for the 2022 election by endorsing Congresswoman Angie Craig and Congresswoman Betty McCollum for reelection and 110 candidates for the Minnesota House and Senate.

“No matter what we look like or where we live, working people deserve leaders who stand with us, not billionaire CEOs,” said Minnesota AFL-CIO President Bernie Burnham. “Every candidate we endorse has met with union members in their communities and committed to protecting and expanding our freedom to join together and negotiate better wages and benefits.”

The Minnesota AFL-CIO endorsed Governor Walz and statewide constitutional officers in March and will be making additional Congressional and Legislative endorsements in the coming weeks.

“The Minnesota AFL-CIO has one of the most expansive independent political programs in the state and we are excited to have conversations with union members on the importance of supporting Labor-endorsed candidates,” Burnham added.

The following candidates have been endorsed for Minnesota House and Senate (as of 6/22/2022):