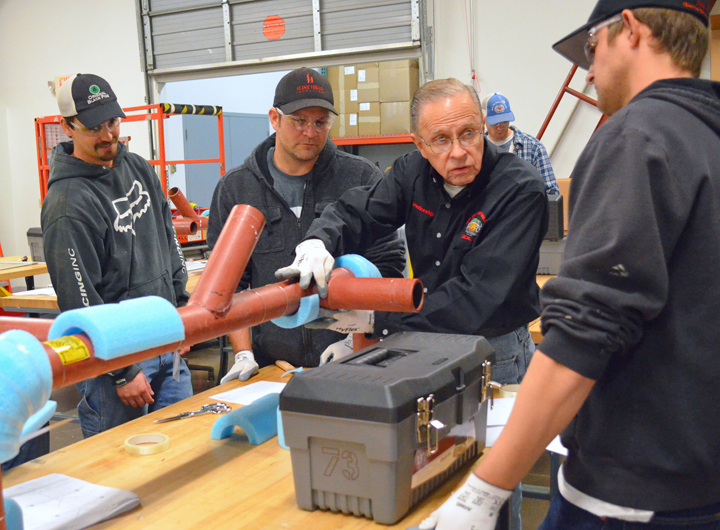 When Joe Odell’s friends plan to go out on Friday nights, he usually takes a pass. It’s not that the 23-year-old from Monticello is no fun, but Odell has someplace important to be early on Saturday mornings: Heat and Frost Insulators Local 34’s training center in St. Paul.

Odell is one of the 11,000-plus registered apprentices enrolled in accredited programs statewide, most operated by Building and Construction Trades unions and their signatory contractors.

Minnesota’s apprentices have a wide range of backgrounds, and they enroll at different times in their lives. But almost all are seeking the same thing out of their apprenticeship: a middle-class career.

“It was kind of hard jumping into it right away, with how young I was,” said Odell, now in his fourth and final year of apprenticeship with Local 34. “But you’re making money the whole time.

“I have health benefits and a pension. If the union stays strong, I’ll probably always have a job.”

By definition, an apprenticeship is an on-the-job training program. Most Building Trades apprentices work regular shifts with a union contractor. They earn more with each year they complete until finally “booking out” into journeyperson’s wages.

Joanna Rojas, a 48-year-old college graduate, is still three years away from earning her journey card with St. Paul-based Plumbers Local 34. But apprenticeship already has enabled the former social worker and stay-at-home mom to make the emergency mortgage payments necessary to keep her Coon Rapids home.

“When you’re only making $15 an hour, and $8 of that is paying for health insurance, you need to do something different,” Rojas said. “I needed the union. I needed a good living wage, or I would have lost my house.”

Apprenticeship programs are rich with stories like Rojas’, of men and women in their 30s and 40s taking the plunge into a new career.

Ken Flores, a 36-year-old St. Paul resident, quit his white-collar job four years ago to enroll in Heat and Frost Local 34’s program. “I realized what I had was just a job,” he said.

Angela Sheehan, 39, said enrolling in Local 34’s program “has changed my life a lot in just two years.” The mother of two from North Branch earns about three times what she took home in the manufacturing job she left behind, and the union’s health insurance plan is far superior.

“Some days I’m like, ‘I still can’t believe this is happening,’” she said.

A ‘win-win’ for workers, employers

The apprenticeship model works well for employers, too. They can customize a training curriculum with the union while coaxing workers into greater responsibilities on the jobsite.

The two experiences go hand-in-hand, said Local 9 apprentice John Haider, a 35-year-old resident of Bayport in his second year of the four-year program. He works a 40-hour week with All City Elevator and attends class at Local 9’s training center in Little Canada on Monday nights.

“You learn a lot in here, but out on the job every day you’re seeing something new and going through it with your (journeyperson) mechanic,” Haider said. “He’s almost like another instructor for those four years.”

The willingness of members of the same union to support each other and share advice is, for Haider, a sharp contrast to his experience working an oil rig in North Dakota for three years.

“Oil fields were huge like that, guys trying to stab you in the back,” he said. “It’s nice having guys looking out for you as opposed to trying to get a step up on you.”

That might help explain why the number of military veterans in Minnesota’s apprenticeship programs is on the rise.

Chris Vant of Osseola, Wis., saw a year of active combat duty as an Army specialist in Iraq. After being honorably discharged in 2010, Vant worked for a non-union construction firm, then used his education benefits to take classes at Dunwoody until a spot opened up in Local 9’s program.

A better deal than working non-union, he added. That meant going without sick pay, vacation time or a pension.

“You started off pretty low in the wages, too, so the only way you could make a decent living was through the overtime,” Vant said. “I worked piles of OT, almost 80-hour weeks, and often out of town.”

Still, the rewards of apprenticeship go beyond the wages and benefits. For Tamika Foster-Dixon of St. Paul, a fourth-year apprentice with Plumbers Local 34, there’s something gratifying about working with her hands.

Jon Antolick, a 37-year-old from Hastings, agreed with his classmate.

“Being an apprentice means you’re a part of something bigger,” he said. “You’ve been a part of a project and built something that’s going to last. There’s a sense of pride in what you do.”

Foster-Dixon laughed: “Even if they immediately cover it up with sheet rock.”