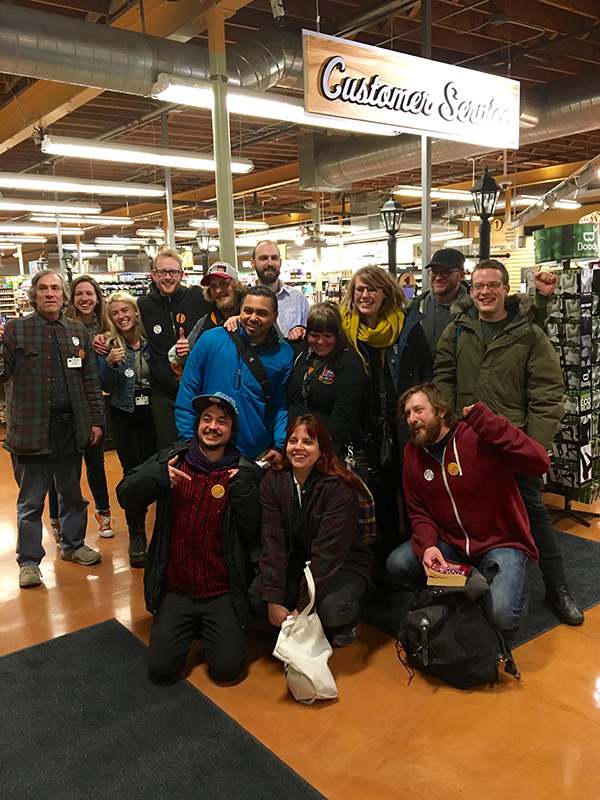 Workers at Linden Hills Co-op won their election yesterday to form a union with the United Food and Commercial Workers, Local 653. 85% of workers voted in favor of unionization.

“We are excited to begin the bargaining process because it is the next step in making our already amazing co-operative even more amazing. We love where we work. This is an extremely positive thing!” said Tracie Lemberg from Health and Body Care.

“I have been working at co-ops in the Twin Cities since I was 16. Forming a union is the best way to make sure all workers are treated fairly and have a say in creating a positive work environment. I’m proud to work at this co-op and look forward to making it an even better place,” said Emily Calhoon from the Produce Department.

Workers want to actively ensure good jobs and a sustainable co-op that best serves the needs of the community.

Evan Adams-Hanson, a Front End Floor Coordinator said, “Forming a union reinforces co-op values of community throughout our store. Linden Hills Co-op can be a model for how workers and management cooperate to ensure fairness, transparency, and accountability at all levels.”

When workers first started discussing forming a union, they met at each other’s houses discreetly to create a safe space to refine their goals and identify who would be most interested in organizing.

“Organizers helped provide advice and experience, but this organizing was done by us – we were making commitments to each other to have each others’ back,” said Grocery Buyer, Bryce Christopherson. “For other workers who are forming their union I would advise as much transparency and outreach to your co-workers as feasible. And reach out – we are happy to help you go through the process of forming your union.”

Mark McGraw from the Scanning department said, “I feel more connected than ever to my co-workers and our store, and I’m excited to have all voices at the table as we move forward with our contract negotiations.”

Support for these workers has been pouring in.

“I am an assistant bakery manager and have been a member of my union for 20 years,” said Monica Hayes who works at the Lunds & Byerly’s in Richfield, “and I want to welcome my new brothers and sisters from Linden Hills Co-op.”

“Our union is part of a bigger movement for change. We want to raise industry standards for all retail workers. This is an example of how workers have power when we act together,” said Judi Johnson, an executive board member of UFCW Local 653 who works as the Floral Manager at the Blaine West Cub Foods.

“I’m excited that workers in Minneapolis are organizing a Union to secure long term improvements and ensuring good jobs in our city. Making sure workers have a voice on the job is democracy in action and is consistent with the spirit of democracy that is core to co-ops. As a member-owner at Linden Hills Co-op, I support these workers one-hundred percent,” said Minneapolis Mayor Betsy Hodges.

“The organizing and activism of these workers is an inspiration to me and all the members of our Local. We wholeheartedly welcome them,” said UFCW Local 653 President Matt Utecht.

Linden Hills Co-op workers were inspired by other workers who recently organized a union at the Wedge Community Co-op and Whole Foods Co-op in Minnesota and the People’s Food Co-op in Michigan.