Friedrichs is history (maybe), but Minnesota workers aren’t letting their guard down 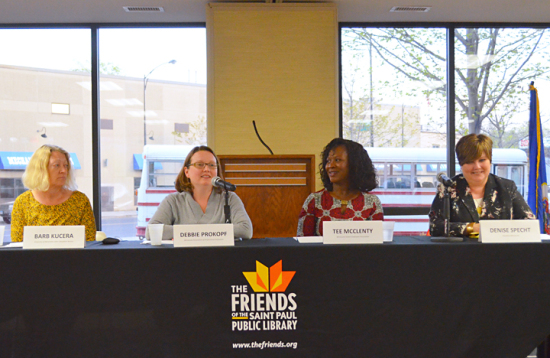 Labor History Month kicked off in St. Paul last night with a discussion of history in the making, as panelists offered insight into public-sector workers’ recent push to breath new life into their unions and defend their right to a voice on the job.

The public forum, titled “The Friedrichs Case and the Future of the Labor Movement,” opened Untold Stories, the labor-history series staged annually in May by The Friends of the St. Paul Public Library, with support from a number of unions.

At last night’s forum, held at the new St. Paul Labor Center, leaders of three Minnesota unions that represent public-sector workers reviewed recent legal and legislative challenges to their organizing rights – and talked about the ways their organizations are responding.

Debbie Prokopf, attorney and business agent for the Minnesota Association of Professional Employees, said corporate-backed politicians and anti-worker legal funds seemingly come up with new ways to “chip away” at public-service workers’ rights every day.

“They’re trying all these wacky, right-wing theories to see what sticks,” Prokopf said, pointing to measures that would require unions to hold recertification votes every year and to negotiate in public, or would severely limit the scope of their contract talks.

Two developments woke Minnesota’s public-sector unions out of that slumber.

First, Wisconsin Gov. Scott Walker, after making scapegoats of teachers and other public workers on the campaign trail, signed legislation designed to cripple their collective bargaining power. And working people in this neighboring state took notice.

“When unions aren’t able to do their work, then we get Wisconsin,” Specht said. “They’re kind of the poster child now – but not in a good way – and that’s helped us in getting our members to realize what’s at stake.”

The U.S. Supreme Court raised those stakes even higher last year when it agreed to hear Friedrichs v. CTA. The case challenged public-sector unions’ ability to collect fair-share fees from workers they represent, and during oral arguments in January, the court’s conservative majority appeared poised to issue a ruling that would make “Right to Work” the law of the land in the public sector.

The writing, it seemed, was on the wall, and public-sector unions last year began scrambling to convert as many “fair-share fee-payers” into full union members as they could before the court issued its ruling.

The Minnesota School Employees Association, which represents 6,000 workers in more than 60 school districts statewide, set a course for signing up 5 percent of its fee-payers.

Executive Director Tee McClenty said the union surveyed fair-share fee-payers and found many had no idea they weren’t paying full dues. MSEA trained stewards, rank-and-file members and staff for one-on-one conversations about fee-payers’ issues and concerns. And within 11 months, the union had reached its goal.

MAPE and Education Minnesota, as well as unions like AFSCME and SEIU, rolled out similar internal-organizing initiatives, with similarly successful results.

“They say don’t waste a good crisis,” Prokopf said. “And I think Friedrichs was a very good crisis for us in that it shook us out of our complacency.”

Will public-sector unions in Minnesota let down their guard again? Not likely, panelists said.

“We didn’t dodge a bullet; we dodged a boomerang,” Prokopf said of Friedrichs, noting that plaintiffs in the case already have filed for a second hearing before the court. “It’s coming back.”

“People were like, ‘What? We’re done with this now,’” McClenty said. “But we can’t get too comfortable. We feel like there’s momentum happening at MSEA, and we want to keep it going.”

Even if a pro-worker justice replaces Scalia, attacks on public-sector workers at the legislative level – including a “poison pill” attachment to the bill approving state workers’ contracts this session – aren’t likely to stop anytime soon.

“We’re not going to let up,” Specht said. “This is the labor movement at stake. We’re all depending on each other to be strong. We’re going all in, and we’re not stopping.”