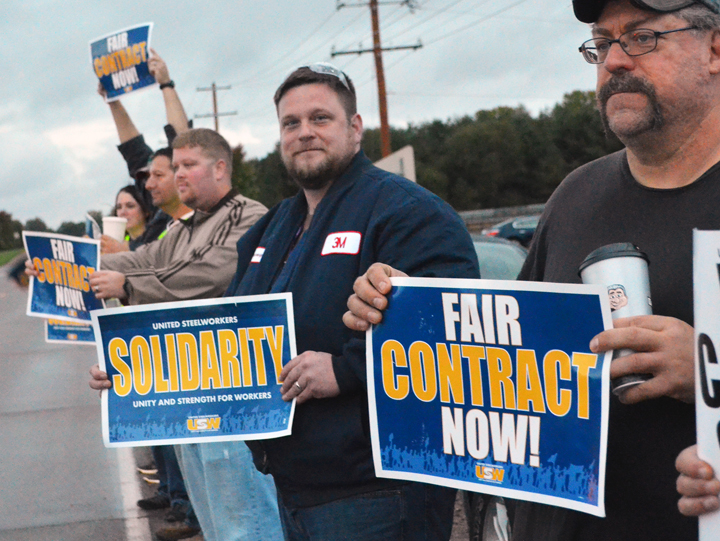 Two days after voting 3M’s contract proposal down, Steelworkers at the company’s Cottage Grove chemicals plant are putting their informational picket lines back up.

Members of United Steelworkers Local 11-00418 said they hoped the overwhelming opposition to 3M’s proposal, rejected by a 5-to-1 margin, delivers a message to the company, which made nearly $5 billion in profits last year.

“We aren’t going to accept some of the concessions that they’re looking for,” Local 11-00418 President Mike Schanks said. “We’re willing to bargain, but some of the things they want are just too much to ask.”

About 380 Steelworkers work inside the Cottage Grove facility, and they’ve ramped up their campaign for a fair contract in recent months, hoping to fight off steep concessionary demands from 3M.

The company wants to roll back several provisions of workers’ previous contract, including premium pay for weekend work and seniority-based layoffs during slowdowns at the plant. 3M also wants to reduce its contribution to workers’ 401(k) retirement plans – and the power to force workers to take extra shifts without paying overtime wages, even on scheduled days off.

In addition to picketing outside their plant, Steelworkers have rallied outside 3M’s headquarters in Maplewood and marched together in community parades. Last month, they voted to authorize their leadership to call a strike if necessary.

The contract proposal voted down Monday came without a recommendation from the local’s bargaining team.

“We left it up to people to vote on their own,” Schanks said. “It was, in my 30 years of working at 3M, the highest turnout for a contract vote I’ve ever seen. These guys are holding tough.”

Their previous contract with the company has expired, but the two sides have agreed to extend the agreement, in seven-day increments, as long as negotiations continue. They are scheduled to meet with a federal mediator Oct. 11.