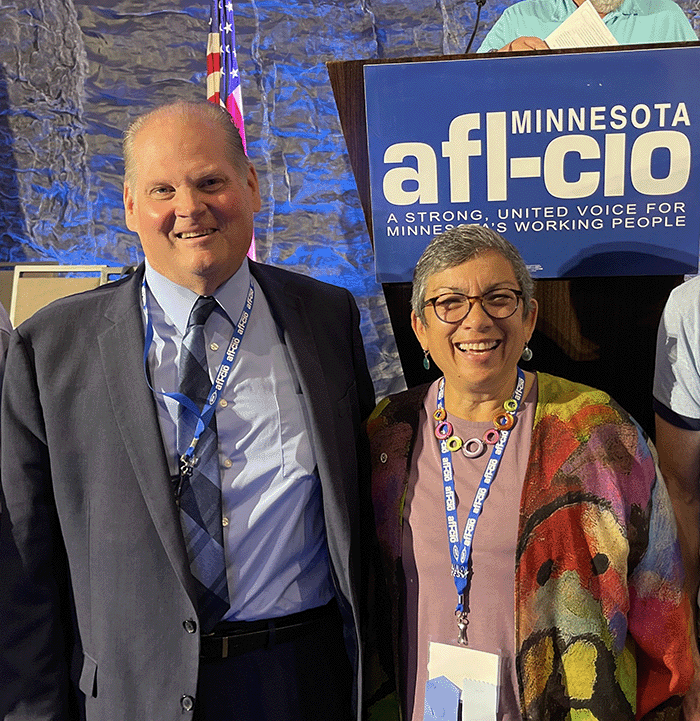 The 56th Convention of the Minnesota AFL-CIO concluded with delegates re-electing President Bernie Burnham and Secretary-Treasurer Brad Lehto to lead the state’s federation of unions for the next four years.

“I’m honored with the confidence representatives of Minnesota’s union movement have put in this team to continue leading the fight for a more just and inclusive state for working people,” Burnham said. “Working people in our state and nation are joining more than we have in a generation and the Minnesota AFL-CIO is committed to protecting the freedom to organize.”

Lehto, a member of the International Association of Machinists, was first elected Secretary-Treasurer in 2018. Prior to his election, Lehto served in a variety of roles for the state federation for 18 years including Chief of Staff and Legislative Director.

“This is an exciting and critical moment to be part of Minnesota’s union movement,” Lehto said. “With an election that will determine whether Minnesota remains a Labor-friendly state less than 50 days away, this leadership team has already hit the ground running to turn out union members to support our Labor-endorsed candidates.”