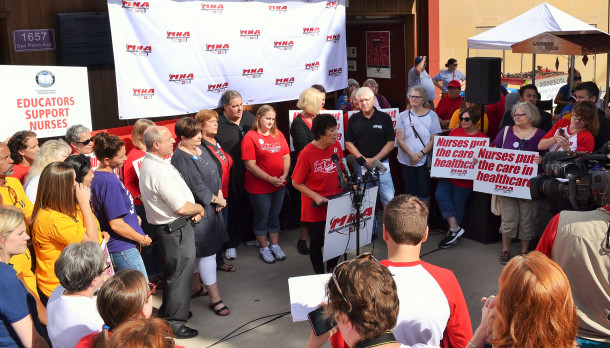 Standing with leaders of unions representing workers across Minnesota, members of the Minnesota Nurses Association today announced they have delivered notice to Allina Health of their intent to begin an open-ended strike on Labor Day at five Twin Cities facilities.

The two sides “regressed” in mediated talks earlier this week, MNA director Rose Roach said during a State Fair press conference at the Minnesota AFL-CIO Labor Pavilion. Allina’s 4,800 union nurses feel “disrespected and devalued” by their employer, which has refused to discuss any of nurses’ top concerns – including workplace safety and staffing – until they agree to give up their preferred health insurance plans.

“Nurses engaged in the mediation process; Allina did not,” Roach said. “It was more of the same: concede on our issue, then maybe we’ll talk about yours.”

United Hospital nurse Bunny Engeldorf, who serves on the the MNA’s bargaining team, said Allina’s hard-line stance in negotiations serves only one purpose – and it isn’t patient care.

“This is an attack on our union,” Engeldorf said.

Union leaders pledged support for striking nurses from workers across Minnesota. Educators, public employees and other health care workers said they were filing the necessary paperwork to join nurses on the picket line outside Abbott Northwestern, Mercy, United and Unity hospitals, as well as Phillips Eye Institute.

Allina nurses, who have been in negotiations with the provider since February, ended a week-long strike June 25 that drew thousands of people to the picket lines, including elected officials, patients and members of other unions.

In talks following the strike, nurses unveiled a compromise that would eliminate two of their quality, affordable insurance plans, but management continued to insist on language that would effectively eliminate all four plans – and refused to consider any other issues related to the contract until nurses bowed to its demand.

MNA members responded by overwhelmingly rejecting Allina’s offer and authorizing a second strike, which will last as long as it takes to get a fair contract, MNA President Mary Turner said.

“We’re going to have the courage and the resources to do that because of these people behind me,” Turner said, turning to acknowledge leaders from the Minnesota AFL-CIO, AFSCME Council 5, SEIU Healthcare Minnesota and the St. Paul and Minneapolis regional labor federations. “We’re going to do this, and we will win.”